The Portuguese distribution operator, EDP Distribuição (EDPD) has been pioneering the deployment of the Smart Grids concept, notably through its InovGrid project and the InovCity initiative, and has been evaluating these projects from a technological, social, and economic perspective.

Picture: InovGrid demo sites; source: EDP
Since 2012, EDP started a large-scale pilot to validate communication technology, escalate operations and ensure integration of multiple suppliers, systems and equipment in different locations with specific social and economic characteristics. After the first phase of smart grid implementation (the Évora InovCity project) which resulted in the deployment of 35.000 smart meters, EDPD installed more than 100.000 EDP Boxes in seven InovGrid demo sites. InovGrid became an active partner of S3C and EDP decided to test 11 tools and guidelines in six of the 10 test sites.
InovGrid is a unique active partner within the S3C active partner landscape due to the variety of guidelines and tools that could be tested. To decide on which tools and guidelines were to be tested, InovGrid followed a different path than other active partners. The decisions were taken based on a set of meetings with different departments and different levels of responsibility in the DSO structure to decide
The project team and its counselling committee decided to develop a set of four initiatives based on the tools and guidelines that would address different issues regarding the engagement of end users in a smart grid empowered energy ecosystem and help to validate and improve the S3C guidance at the same time:
Meter installation initiative (tools & guidelines: Meter installation (G); Training Installers (T); FAQ during the installation process (G)). The main goal of this initiative was to optimize the meter installation process in a way that it would contribute positively to the engagement of the end-users with the project. This initiative was tested in five InovGrid demo sites: Parque das Nações, Alcochete, Lamego, Évora and S. João da Madeira.
Stakeholders engagement initiative (tools & guidelines: Stakeholders coalition (G); Potential allies on a regional level (G)). The experience of our project in Évora is an indicator that it is wise and advisable to collaborate with local stakeholders and involve them with the project in order to take advantage of their strengths, communication channels and links with the community. The initiative Stakeholders engagement was tested in the following InovGrid demo sites: S. João da Madeira, Alcochete and Lamego.
A specific study was developed in more detail for the Alcochete demo site based on the guidelines "stakeholders coalitions” and "potential allies on a regional level” that have been merged into one guideline called "How to identify regional stakeholders”. The study is based on in-depth interviews, targeted to the city hall, school community, local foundation, parish representatives and consumers. The research objectives were to find ways of generating greater engagement of relevant stakeholders in Alcochete for a smart grid project.
Gamification initiative (tools & guidelines: Gamification (G); How to motivate behavioural change with personal goals (G); Competition and social comparison (G)). Can a gaming approach turn a low-engagement topic such as ‘energy’ in an engaging one? Can a gaming approach help to introduce energy efficiency or smart grid concepts to the population and communities? The gamification initiative was tested in Alcochete and involved more than 100 players from around 9.200 domestic customers. 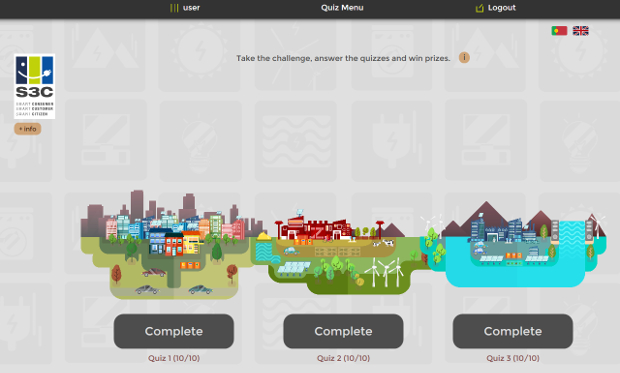 Home Energy Management initiative (tools & guidelines: End-user feedback (G); Smart appliances (G); Monitoring functionalities (G)). The new energy ecosystem enables the surge of new products & services. The project decided to study the perceived increased value and the increment in the engagement of the end users of an energy management system. This initiative was tested with around 16 home energy management service (EDP’s re:dy) customers in Oporto and Lisbon.
Which role does the end user play in the InovGrid project?
EDP has been evolving from a concept in which the customer was a user of services defined unilaterally and unidirectionally, to a customer-centric one, focusing not only on economical aspects, but also on social and behavioural features. This avant-garde model allows a new approach on many aspects, namely, energy efficiency, CO2 reduction and smart consumption patterns that represent an active customer’s need for information and satisfaction.
In Évora InovCity, the end users were involved through three different engagement strategies:
Firstly, explaining to all customers smart meter functions and communicating its benefits on the short and long run. Secondly, testing the use of new products and services that can be provided via the smart meter. This involved around 1,200 domestic customers. Thirdly, in the later stage, trying out and co-creating new products and services. Since interactions with the utilities have been raised up as an important issue, new  interaction schemes were tested in three small groups of users. This involved around 50 consumers.
The initiatives carried out under the involvement in S3C at the other trial sites were to built on the approach and a) double-check whether the approaches and actions taken were in line with other European initiatives and best practices and b) to further develop the approach for the new test sites.

Picture: InovGrid innovative platform; source: EDP
The results of the initiatives taken by EDP based on the S3C toolkit worked complementary to each other and created significant impact.
The results of the stakeholder initiative had a direct impact on the gamification initiative. An in depth stakeholder analysis was carried out. The methods implied by the guideline were furthermore tested and double-checked in several InovGrid test sites. The results of the Alcochete study were directly related to the next initiative carried out in the test-site – the gamification initiatve.
Stakeholders in Alcochete pointed to the benefits of engaging younger generations in the Smart Grid trial while sensitising them for responsible energy consumption at the same time. As a result, the first local supporters for the gamification platform to be developed could already be involved – especially in the school district.
Regarding further results of the stakeholder initiative, from the beginning it was clear that there are two different levels of involvement with the InovGrid project among stakeholders in Alcochete depending on the information stakeholders have about the project and the degree of direct contact with EDP. City hall and stakeholders in more regular and direct contact with EDP refer to a very positive and open relationship while others show a more distanced attitude towards smart grid projects.
To inform those stakeholders without direct contact and to extend pre-existing relations, specific initiatives appealing to different stakeholder groups were set up. The interviewed stakeholders referred to these initiatives implemented as very positive. Especially a smart grid exhibition was perceived as a good way to bring the new technologies closer to the population.
The gamification platform took several non-monetary incentives to the test by building a web-platform with energy quizzes, persuasive feedback and a goal-setting components mainly targeting school children. While the results of the initiative would have been more stable, if the test time-frame would have been longer, the first results indicate a clear impact. The participants that actively used the platform were able to decrease their energy consumption by more than 28 % compared to their consumption during the same time in the preceding year. The answers in the quiz were mostly answered correctly indicating that people really engaged with the platform and that the incentives chosen by EDP were successful in raising the attention of their target group.
The Meter Installation Initiative served to revisit and improve the entire meter installation process for the new trial sites of the InovGrid project. The EDP team within the S3C consortium was mainly in charge of the drafting of the guideline. In fact, as with the stakeholder initiative, the utility could put their concepts to the tests, benchmark them to other projects and rollouts and then further develop their processes. In workshops, the EDP staff directly interacted with the installers to increase learning and sensibility of the installers for customer needs. Together, the utility and the contractor identified challenges and ways to overcome them. As a result of the learning that customers need thorough information about the newly installed technology and will ask the installers for help, EDP has introduced a new and thorough FAQ section covering the rollout on their website that the installers can refer to when being asked on-site.
The Home Energy Management initiative served to double-check the user engagement approach and user-friendliness of EDP’s own Home Energy Management offer. The EDP approach was compared with the advice in the guideline and studies on feedback channels, different types of users and potential improvements of the offer now complement the knowledge in the guidelines tested in this initiative.
Further information
Visit the S3C toolkit!