The final conference of the S3C project was successfully held on the 24th of September at the Neue Mälzerei in Berlin, Germany. The S3C project presented its final results from three years of research on the engagement of end users in smart energy projects including the web-based S3C toolkit for end user engagement.

The S3C – Smart Consumer, Smart Customer, Smart Citizen – project will conclude at the end of October 2015. Now, a month before its official end, the S3C consortium held the projects final conference titled "Empowering people for the smart energy system of the future” in Berlin.
The conference was kicked off with a keynote speech from Richard Hampton, S3C’s project officer. His speech "Power to the people – a new deal for energy consumers” focused on the changing role of the energy consumer in Europe’s energy future. In this framework, Mr. Hampton also presented the "New Deal for Energy Consumers”, a communication published by the commission this July focused on three key points: empowering consumers to act, making smart homes and networks a reality and paying special attention to data management and security.
The second key note speech of the day was held by Maher Chebbo, the president of ESMIG. His presentation "Smart Consumer, Smart Customer, Smart Citizen – The Digital 3C Transformation” broached the subject of ‘digital energy’ and what’s in it for the customers.
After that Erik Laes (VITO), the S3C project coordinator took the stage to present the key results from three years of research on end user engagement in smart grid projects. The presentation focused on the recently launched final version of the S3C toolkit for end user engagement. The S3C toolkit was developed for utilities, project managers, energy agencies and city developers who are involved or intend to become involved in the active engagement of consumers in smart energy projects and features more than 50 tools and guidelines on topics that have been identified the most promising opportunities for a long-term engagement of consumers, such as co-creation, community approaches or non-monetary incentivation strategies. 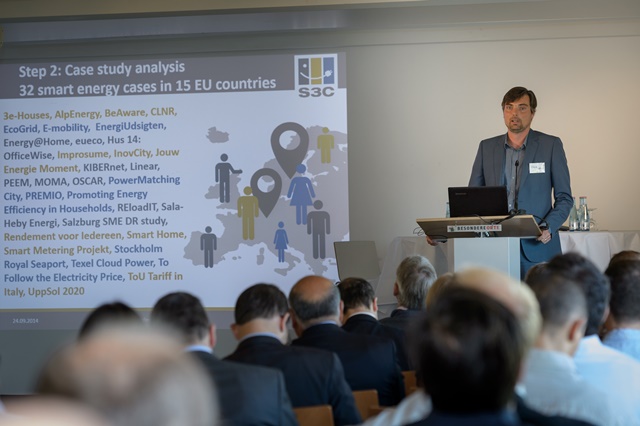 Dr. Erik Laes, VITO. S3C project coordinator, presenting key results of the S3C project © B.A.U.M./ André Wagenzik
The S3C tools and guidelines have been tested in the field by our smart grid project and utility partners, some of whom were represented in the three panel discussions that followed:
Panel one: Smart Energy Community Approaches
The first panel was moderated by Matthijs Uyterlinde and Koen Straver (ECN) and focused on one of top opportunities for end user engagement identified within S3C: community approaches.
The panel started with the panelist Maja Bendtsen (Østkraft) presenting the EcoGrid project, an active demand project on the island of Bornholm in Denmark. "The social skills of technicians are crucial” was just one of the key learning that were presented. Simon Strandberg from STUNS Energi continued to present the project UppSol2020. The project aimed at speeding up the implementation of PV in Sweden. The project teamed up with early adopters and put a strong focus on peer-to-peer learning. The UppSol2020 project is one of S3C’s partner projects and collaborated as part of an evaluation of the UppSol2020 project. After that, Dr. Han Vandevyvere (VITO), coordinator of the City-Zen project presented his two pilots in Amsterdam and Grenoble, where three simultaneous development tracks are planned: urban renovation, district heating & cooling and a smart grid roll out. Mr. Vandevyvere emphasized the need for a strong involvement of the citizens in this project, including e.g. a serious gaming approach. The next panelist, too, talked about how games can raise the aware ness for a more conscious energy behaviour. Vera Nunes (EDP) as representative from the InovGrid and InovCity projects, spoke about how the S3C tools and guidelines facilitated the work of their projects by developing new initiatives at their demo-sites, such smart energy quiz game that was launched at a secondary school in the Alcochete municipality.
The panels concluded with a presentation by Andreas Schläpfer, coordinator of the energienetz GSG, a network with the two main goals: to increase energy efficiency at the company level and to develop a sustainable energy supply. Mr. Schläpfer highlighted building trust as one of the most important part of his work.
Panel two: Smart Energy Research beyond S3C
In the second panel Erik Laes (VITO) and Kerstin Niemeier (B.A.U.M Consult) moderated a discussion the Smart Energy Research beyond S3C. The panel started with an introduction to the nine key challenges for research on end user engagement in smart grids that were identified within the S3C project. Now, the project created tools and guidelines to address and overcome these challenges. But where are the gaps and what are the implications for the next research projects?
To discuss this question, five panelists were invited to join the stage: Stella Di Carlo (Enel), representing S3C’s sister project ADVANCED, Prof. Julia Seixas (New University of Lisbon), coordinator of the research group on energy and climate at CENSE, Rob Kool, representing the IEA, Michael Hübner (BMVIT), coordinator of the ERA-Net Smart Grids Plus initiative and Michele de Nigris (RSE), chairman of ISGAN. One of the main discussion points of this panel centered around segmentation and addressing more different customer groups.
- "